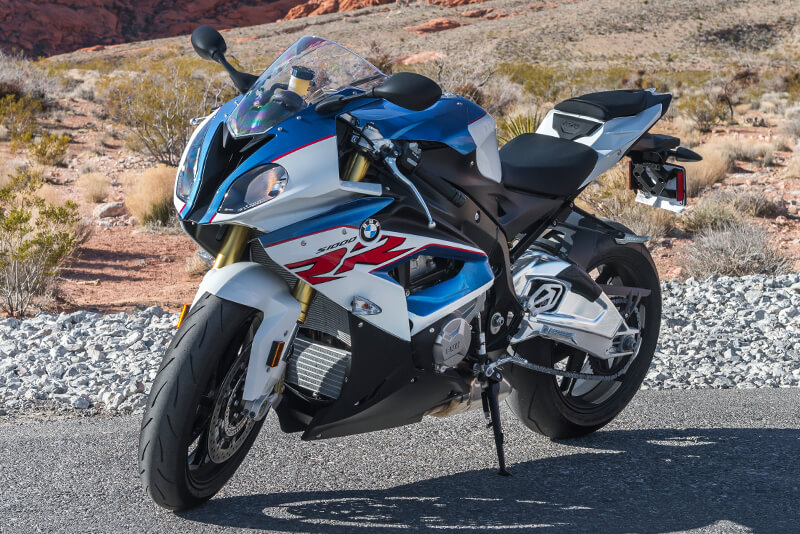 Unveiled a decade ago to compete in the 2009 Superbike World Championship, the 2018 BMW S1000RR takes the superbike into its second decade. As the most powerful bike in its class, the new offering has a personality to match its iconic German heritage.

The S1000RR matches its name with a 1,000cc, liquid-cooled 4-cylinder engine mated to a six-speed, straight cut manual transmission with 190 horsepower and 83 lb-ft of torque. If your idea of a getaway day in the Las Vegas desert in a jolting, open-air manner, the two-seat, street bike BMW will comply with gusto. It accelerates from 0-60 mph in 3.3 seconds and completes a standing mile in 10.1 seconds. Top speed for the rear-wheel drive, the 459-pound bike is 208 mph.

The BMW’s power and driving prowess are further defined with its three driving modes, Race, Rain, and Sport. They’re ideal all weather and traffic scenarios. The driving options ideal coordinate of the DTC and ABS electric throttle options. The keen feature allows more direct and finely distribution of the bike’s explosive power.

Beyond its impressive performance traits, consider the new BMW’s stealth exterior stylings and interior attributes. As a defining superbike, the S1000 RR’s aluminum frame has a stunning stealth design. With its asymmetrical headlamps and split face, the BMW is unmistakable. The fly line is razor-sharp, and the bike’s overall line ideally meshes.

And if you’re also cruising on an extraordinary performance machine, you might as well be able to check out your effort. All engine settings are ideally visible with a high-pixelated instrument panel.