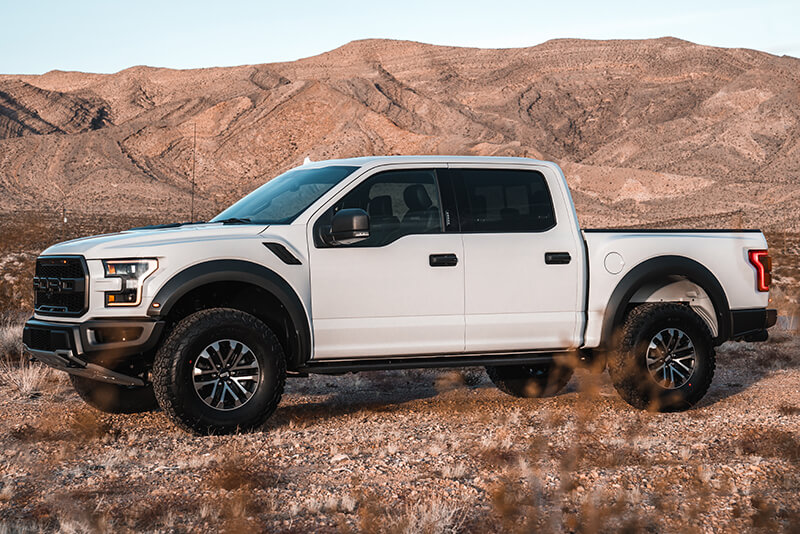 Rent a White Ford Raptor All Wheel Drive — a 5-seater Offroad SUV with a 3.5L Twin-Turbocharged V6 engine, differential, and tons of upgrades!

The Ford F150 Raptor has a reputation as one of the toughest, most capable trucks around. The all new Raptor comes with equipped with high performance, a powerful engine, and an extremely capable suspension setup, and off off-load abilities that can just about put professional desert racing trucks to shame.

The 3.5L Twin-Turbocharged V6 produces a hearty 450 horsepower and 510 pound-feet. The 3.5L twin-turbocharged is direct, and moves the near 5,500 lb truck like it weighs half that. Torque arrives early with fervor, propelling the Raptor to 60 mph in just about 6.0 seconds. All of that intoxicating power comes paired with a 10-speed automatic transmission.

Ford has made one ultra significant performance upgrade compared to their older models. An adaptive suspension with Fox Shocks now comes standard across the board. It makes the already capable truck even stronger. The shocks react to throttle, braking, and steering inputs, and dampen decisively on what the driver is doing.
‍

Get ready to have an adventure of a lifetime. The Ford Raptor does not disappoint !

This rental is in high demand right now
000 people have visited this page in the past 24 hours.